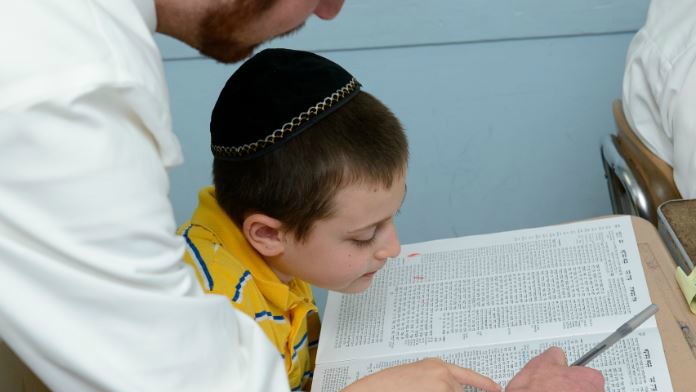 “There are a million arguments for avoiding P’TACH,” says Rabbi Reuven Kamin, program coordinator of the P’TACH program situated within Yeshiva Rabbi Chaim Berlin, “and only one argument in favor – giving a child with learning differences the opportunity to succeed. For some parents, accepting that their child will not grow up as they imagined is a big pill to swallow.” Instead of reasoned decision-making, it is often failed expectations and disappointment that bring parents to P’TACH.

“When parents and educators think they are making the best decision by delaying specialized education to avoid the stigma of learning disabilities, this is called “misplaced sympathies,” says Dr. Judah Weller, Director of P’TACH. “Parents always want the best for their children, yet they sometimes make decisions based on feelings, not established educational principles. The same thing happens with teachers and administrators in mainstream schools. Teachers care about their students and keep trying even though they may not be equipped to teach children with learning differences or simply cannot handle them with 20 or more, other children in the classroom. To the detriment of the child, they too say, ‘if we give it a little more time’, or “if I work a little harder’ things will be okay.”

Earlier intervention allows educators with special training to provide a foundation for learning that follows the child through elementary and middle school, culminating in partial or full mainstreaming in high school. The opposite – keeping a child in mainstream classes when they clearly need additional help, and dealing with learning disabilities later – is a road to disaster. Using a simple formula, Rabbi Kamin explains the results of two different reactions by parents to the fact of learning differences in their children: Learning differences + parental resistance = suffering
Learning differences + parental acceptance = coping
The first causes impaired identity development, which manifests in depression, anxiety, and other psychological and physical health problems. It is demoralizing to sit in a mainstream class and fail. The second leads to wise decisions that promote happiness and pride in accomplishments.

According to Rabbi Kamin, it is the responsibility of educators to encourage reasoned solutions. “A principal once told me he did not want to refer a child to P’TACH because it would upset his parents. This is an example of misplaced sympathies. Who are you concerned about? Who should be the target of your sympathies? Of course, the child, who will suffer without a proper education.” Parents must learn to accept their child’s differences at the cost of their own discomfort. Young children who attend P’TACH’s enriched classes have the easiest time adjusting and have the advantageTen-year-old

Shmuel struggled in kindergarten through third grade, which put him behind in everything from math to Jewish studies. “I didn’t really have friends in second and third grade,” he says. Instead of understanding his plight, teachers put him at the back of the classroom, because he was inattentive and could not follow the lessons. He did not want to be ostracized and he spoke up, talking back to the teacher and getting sent to the principal. The situation deteriorated, and Shmuel became the boy known for misbehavior, when in fact he was being punished for having a learning disability. Getting in trouble got him attention – though not the type of attention he needed. “Now, in P’TACH, I feel better because I know how to read, spell, and get along with the other boys,” I get lots of attention’” Shmuel says.

Rabbi Mordechai Tesser, a 23-year veteran of P’TACH at Chaim Berlin and speaks eloquently about the frustrations of young children with learning differences. “Small children do not understand what their disability is,” he says. They lack basic skills and quickly learn to hide in their mainstream classes, anxiously hoping the rebbe will not call on them.” Misplaced sympathies come into play when failed methods are repeated over and over again in the misguided hope that one day they will work. Tutoring in one subject may help, but the child still falls behind in others. And thus, the cycle of tutoring in different subjects begins, along with resource room support, and this misguided attention keeps going until the child begins to fall apart. Knowledge is the antidote to misplaced sympathies, Rabbi Tesser continues. “The first time you get that gut feeling that something is different, do not waste time waiting to see if things will change. Get your child tested. Once placed at P’TACH, the program coordinator leads a team of educators and other professionals that work with each child needs. For children who attend mainstream classes while in the P’TACH program, P’TACH teachers become advocates for them if at times they struggle. That kind of comprehensive support makes P’TACH a very different and successful place to learn.